Beginner's Guide: Don't fall for DeFi-Airdrop-Scams on 4chan & Telegram​
(I recently created
Для просмотра URL-ссылок и контента, нужны, Вход или Регистрация пожалуйста, выполните их!
and I thought it would be helpful to have an English translation here on the international Beginners & Help board!)​

DeFi (Decentralized Finance) has been on everyone's lips since the beginning of 2020 and new projects are constantly being added. Even experienced users find it difficult to keep an overview here. Unfortunately, cases of fraud in DeFi projects have also been increasing recently, because similar to the ICO hype in 2017, the DeFi hype in 2020 also attracts a large number of scammers.
Нажмите для раскрытия...

A few days ago I had a little bit of free time browsing on 4chan (a trash online board, on which various new crypto projects get "shilled" by anonymous users, in other words a filthy scammers paradise, which I didn't know by that time). While reading across the board, I found a post which advertised a free airdrop of an idiotic MEME-Coin-Scam, which got my attention. The rules were pretty easy: Join the project's Telegram group, enter an ETH-address and get a few free tokens. I thought: "Let's give it a try, what could go wrong..." and I joined the project's Telegram channel.

This is what I saw when I entered the channel: 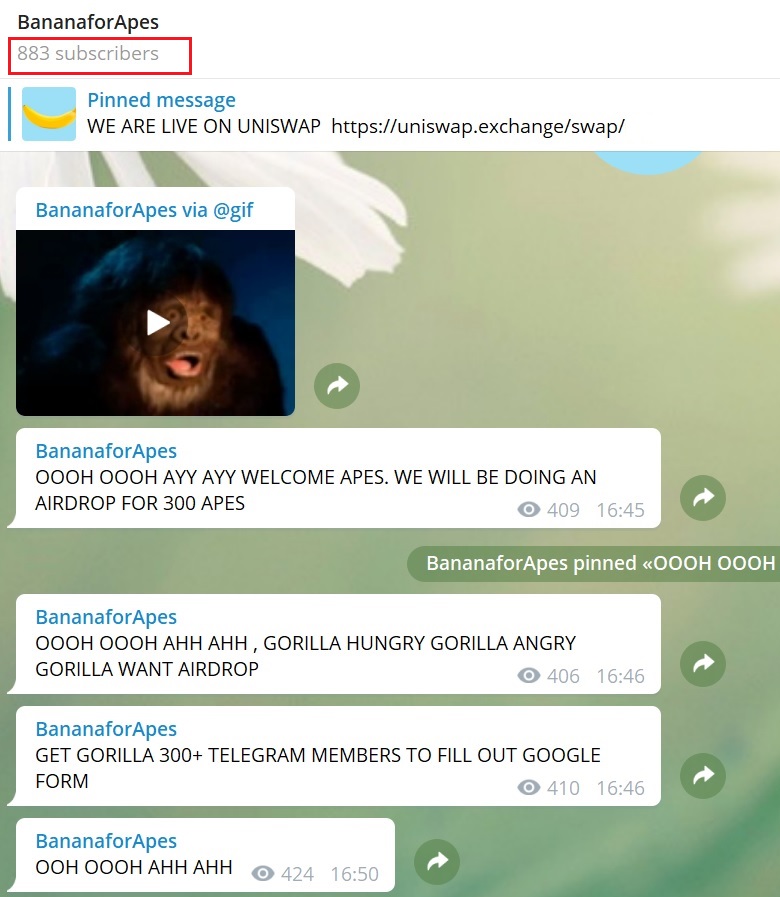 While reading the first posts in the channel I thought "what kind of bullsh*t is this", but the channel filled to over 1000 users within a few minutes. Absolutely insane! More and more users were joining the channel and the anonymous developer continued to hype them with his idiotic shitposts. After about 20 minutes the developer posted the link to the "airdrop form". And this is what it looked like: 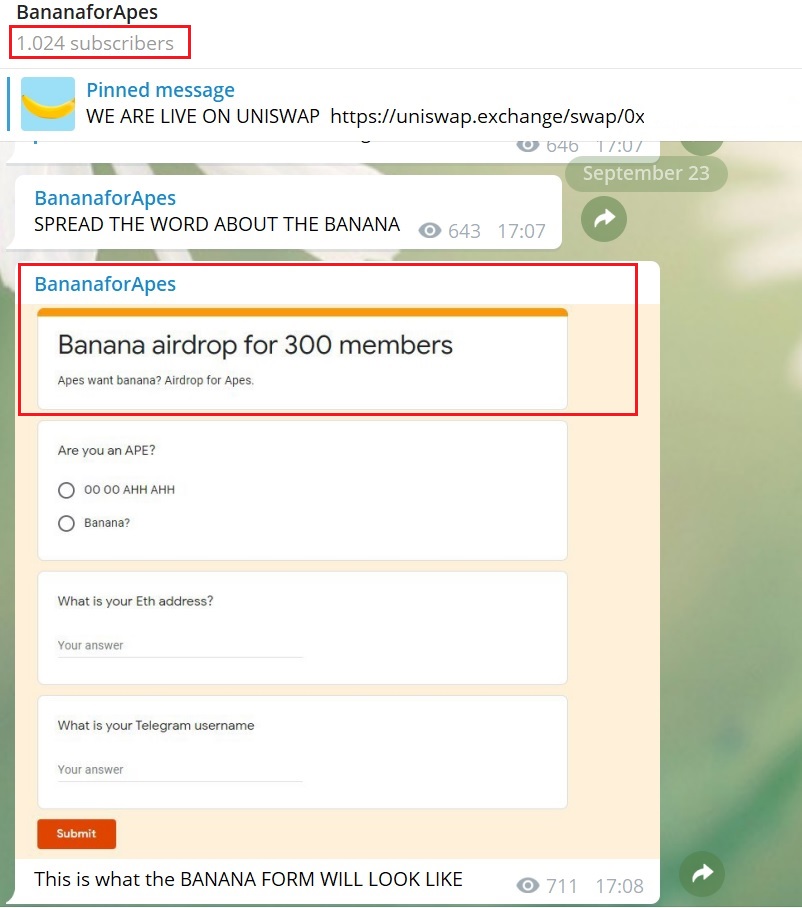 I entered my "airdrop details" and after less than two minutes the airdrop form was already closed again. Over 600 people signed the sheet in less than two minutes. The hypetrain was starting off and the anonymous developer kept spamming his idiotic messages. Now of course I was curious whether I should really get the "airdrop tokens", or if all of this was a bad joke/scam.

A few minutes later the anonymous developer sent another message, in which he started to ask for 20 ETH in "contributions" or "donations" for additional liquidity on UniSwap. As a reward, there should be then further BANA tokens for all donators. 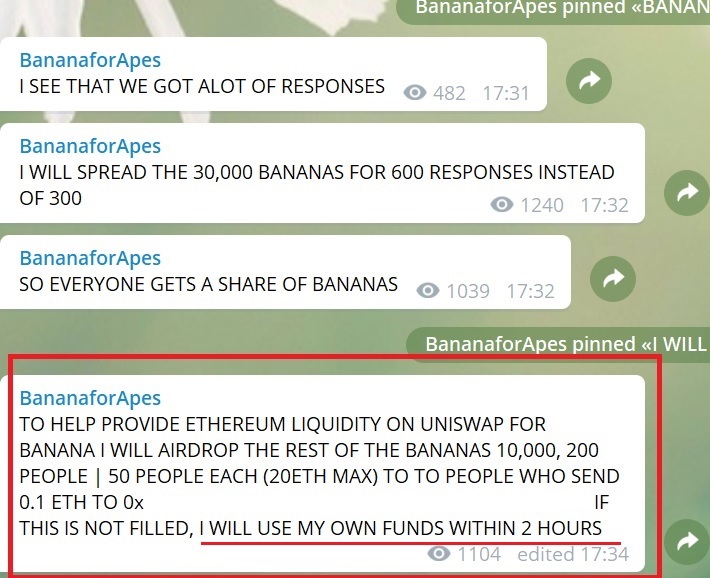 I immediately thought: "Oh come on, are you really trying to exit scam here? Nobody can be that stupid to send ETH to a completely unknown anonymous project without a website, a whitepaper or any social media accounts just to participate in an anonymous airdrop for a random scam coin, which is going to be listed on UniSwap."

But to my absolute surprise a lot of people really were that stupid.. - the required 20 ETH were reached within less than ten minutes and the hype/shilling of the scam coin continued. Here is an excerpt of how the individual transactions were sent into the scammer's ETH wallet: 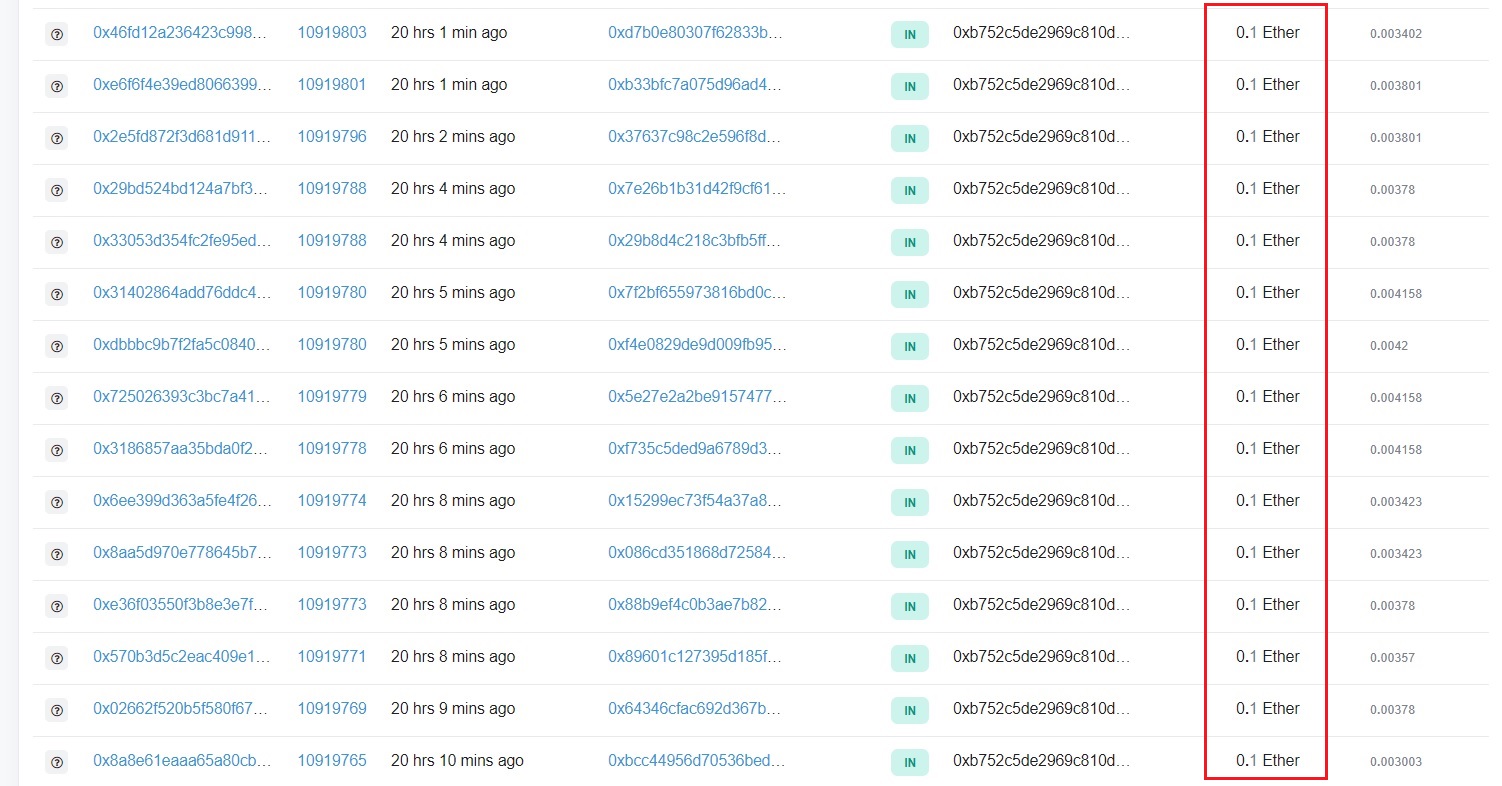 As of now, the developer/scammer had already taken over 20 ETH and I thought the exit scam must be around the corner any minute. But I was wrong again. To my surprise, the developer/scammer really began to send the project's tokens to the "airdrop participants" and I also got 50 BANA sent to my ETH wallet. The anonymous developer then continued to "shill"/hype his coin in the project's Telegram channel and even more people were joining the channel. At that time, the channel had almost 1500 users.

A few minutes later the anonymous developer then really listed the coin on UniSwap and requested everyone in the channel to provide additional liquidity, to shill the coin on 4Chan, Twitter, Bitcointalk and other Telegram groups - and of course to buy his scam coin. And now you might know what happened: Yes, people really started to buy his coin and added several ETH liquidity on UniSwap (lol, I still can't believe that this really happened!).

The coin started pumping so far that the "airdropped" coins were temporarily worth more than 0.5 ETH (I didn't sell my "airdropped" coins, since I knew by that time that the whole thing must be a scam and I didn't want to dump my free bags to some other innocent users.) This UniSwap-pump-spectacle lasted only about 15 minutes, as with increasing liquidity by other users, the developer began to sell his token share and to withdraw his own liquidity. While the scammer sold his own coins, he of course kept hyping the users on the project's Telegram channel.

After about an hour the scam was over and the coin's price fell to almost zero. The scammer made about 30 ETH and many users who jumped on coin later on had lost their valuable ETH.

In my opinion this report describes the current state of many crypto airdrops/scams really well. Compared to the "ICO-bubble" in 2017/2018 things got even worse. Nowadays you don't even need a whitepaper, social media accounts or a real team. As long as scammers know how to shill their project, there are enough users that are willing to buy any bullsh*t coin, no matter how bad it is or how little information are available.

To all newbies out there and to everyone who is new to the DeFi-World: Don't fall for these kind of scams. Always do a proper research and double-check all information given before investing real money.

Some time ago I posted here on Bitcointalk, that I think that things like the 2017/2018 ICO scams won't happen again - but I was wrong. It is happening right now and things got even worse.